How To Use Apple Cider Vinegar To Lose Weight

Even though the use of apple cider vinegar has now slowly risen in popularity.  It has been used for centuries for medicinal purposes such as cleaning wounds. In addition, it was often used as a home remedy for treating sore throats, etc.

Please note that this post may contain affiliate links. You can read my full disclosure here.

What is Apple cider vinegar?

To fully understand why many popular programs like the 21-day fat loss challenge recommend apple cider vinegar works for weight loss, we first need to understand what it is.

The magic of apple cider vinegar lies in the 2-step fermentation process it undergoes.

In the first step, apples are crushed and yeast is added so that it can break down the natural sugars into alcohol. The second step involves adding bacteria into the alcohol solution to break it down into acetic acid.

What results is a natural product full of nutrients that have been fortified during the fermentation process.

You can easily spot organic apple cider vinegar as it has what is known as the “mother”. A brownish strand made up of enzymes, proteins, and good bacteria that give it a somewhat murky appearance.

Many people have associated the “mother” with all the benefits of apple cider vinegar. 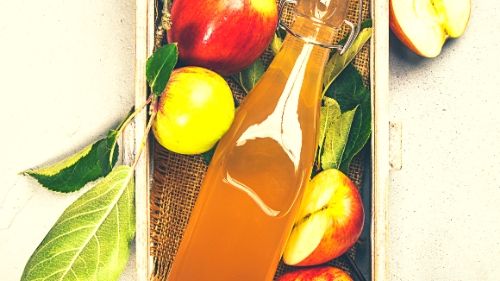 Benefits of apple cider vinegar you should know

Most people know apple cider vinegar due to its effects on weight loss. It’s used in programs such as the 21-day fat loss challenge to boost fat burning. However,  It’s much more than that.

1. It can help you control blood sugar

Controlling blood sugar is not just important for those with diabetes. High levels of blood sugar can lead to an increased risk of chronic diseases and even aging.

The reduced their blood sugar levels response by 31%. According to the results of the study, this can be achieved by just mixing apple cider vinegar into your salads dressing.

Before modern-day disinfectants and sanitizers, apple cider vinegar was used to clean and disinfect wounds. This is due to its main active component, acetic acid’s ability to fight and kill bacteria.

The benefits of this anti-bacterial property don’t just stop there, apple cider vinegar can also be used as a food preservative. It has been shown to prevent the growth of bacteria such as E.coli.

3. Can be used to improve skin

What’s more, as a powerful anti-bacterial, it can kill bacteria on the skin that contribute to skin irritations.

Apple cider vinegar is often used as a hair treatment due to its acidic nature that can help restore the pH of the scalp. This can help reduce infections such as dandruff. 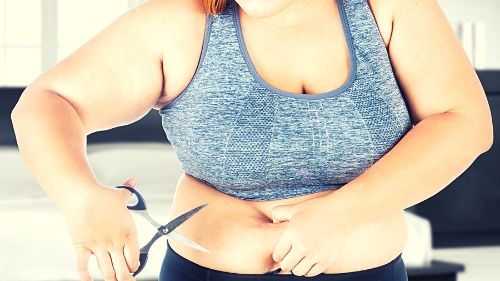 How ACV helps with weight loss

According to a 2014 study, acetate found in apple cider vinegar can suppress the appetite center in your brain. This can help you eat less and help you lose weight faster.

Even though no human trials have been done to prove this. A study done on mice found that apple cider vinegar can boost metabolism. There was a significant increase in the enzyme AMPK.

This particular enzyme helps to boost fat-burning while at the same time reducing the production of fat and sugars in the liver.

3. It helps to burn body fat

According to a 12-week study of obese Japanese subjects, daily intake of apple cider vinegar can help you burn more fat. This is because participants who used apple cider vinegar were able to decrease their body fat and BMI compared to the placebo group.

This was attributed to the fat-burning effects of acetic acid in addition to fat-suppressing.

Acetic acid, the main active component of apple cider vinegar was able to block certain enzymes that would otherwise create fatty acids. A process that would result in the body creating fat.

This was shown to be a result of improved gut bacteria that influences how your body burns and stores fat. Using Apple cider vinegar for weight loss can help you regulate your metabolism by increasing fat burning and reducing the storage of fat in the body 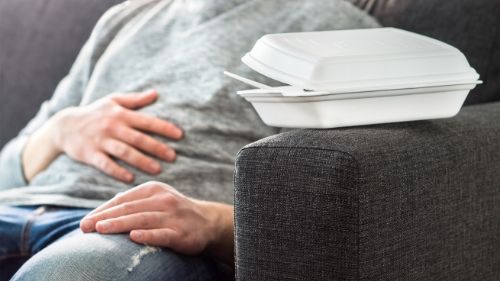 4. It makes you feel full

Studies have shown that drinking apple cider vinegar before indulging in a high-carb meal can help you eat less as it makes you feel full faster. This is especially useful if you’re trying to lose weight in a month or faster.

In this particular study, those who took apple cider vinegar ended up eating less throughout the day as much as 200-calories.

In addition, apple cider vinegar slows down stomach emptying meaning you’re not mindlessly reaching out for the next healthy snacks as you’re feeling full.

How to add apple cider vinegar to your diet

To add apple cider vinegar to your diet, you have to find a way to dilute it first as you should never drink it undiluted. Even popular weight loss programs like 21-day fat loss challenge will advise you to either;

Because apple cider vinegar is very acidic it is important to stick to recommended dosages. You must always use it in a diluted form and never take it undiluted. It will do more damage than good to your body.

Most experts recommend that you stick with apple cider vinegar brands that have “the mother”.  You will notice it as a brown murky or stringy substance in your bottle.

These brands are unfiltered and hence provide you with the most benefits. One popular brand you can use is the Braggs apple cider vinegar.

What is the right dosage?

Currently, it is recommended you stick to 1- 2 tablespoons daily. This means no more than 15ml – 30ml of apple cider vinegar.

However, when you’re just getting started you can start with as little as 1- 2 teaspoons daily. It’s also not recommended you take no more than 1-tablespoon at a time.

You can mix it in your water and drink it throughout the day. This is the best way to effectively use apple cider vinegar for weight loss. 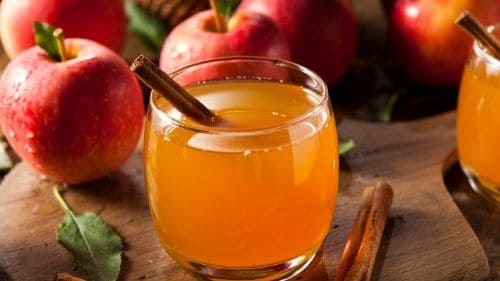 When is the best time to drink apple cider vinegar for weight loss?

You want to have your apple cider vinegar first thing in the morning before your breakfast or at least 30-minutes before your meal. This helps you feel full faster and you’re more liekly to eat less food.

Are there any risks associated with apple cider vinegar?

Apple cider vinegar is acidic and this means when you take too much of it or when you consume it undiluted, you risk destroying your teeth.

What most people don’t realize is that this decay just doesn’t happen overnight. As your enamel starts to erode, you will start to have tooth sensitivities. You become very sensitive to hot and cold foods in addition to sweet foods.

Eventually, you start having aches and may even require filling.

One of the major causes of erosive tooth decay was reported in a  15-year girl a result of drinking a glass of undiluted apple cider vinegar daily.

When you’re trying to lose weight, delayed stomach emptying means you feel full for longer and hence eat fewer calories. However, this effect also comes with its own side effects.

In a 2013 study, participants reported feelings of nausea and in some cases indigestion. What’s more, delayed stomach emptying can have serious consequences for those already struggling with digestive issues.

This includes those with diabetes and stomach ulcers.

While there are no published reports of throat burns due to apple cider vinegar itself, it has the potential to cause throat burns.

Take for example this case of a woman whose apple cider vinegar pill got stuck in her throat. As a result, she experienced some burns resulting in difficulty swallowing and even breathing for almost 6-months later.

In addition, another report found that among accidental injuries due to swallowing substances by children, acetic acid found in apple cider was the most common.

The report advised that apple cider vinegar should always be stored in child-proof containers to avoid the risk of esophageal burns. 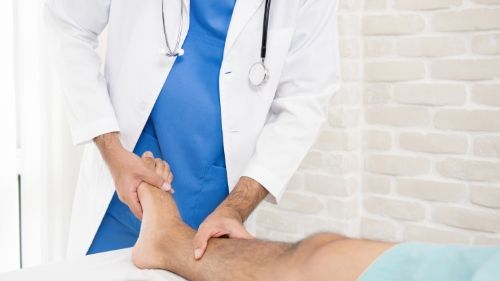 Consuming large amounts of apple cider vinegar can worsen or lead to low potassium levels. Even though many people with low potassium show no symptoms, some severe cases can cause muscle weakness and lead to paralysis.

In one reported case, a 28-year old who was admitted with low potassium levels. Upon investigation, doctors found that she had been drinking 250ml of apple cider vinegar daily for years.

She was also diagnosed with brittle bones, a condition is rarely seen in someone that young. Doctors attributed this to the fact that to buffer the acidity in her blood, her body was releasing minerals from her bones.

Apple cider vinegar may also affect how certain drugs work. This is especially for those who take medications for;

When you consume diuretic drugs, you may lose large amounts of potassium. This in combination with apple cider vinegar which causes low potassium levels may put you at risk.

But what exactly are apple cider vinegar pills?

Apple cider pills are a dietary supplement made from dehydrated vinegar. The pills are just like liquid apple cider vinegar however the amount of ACV present will vary from brand to brand.

Hover, many brands keep up with the recommended dosage and include 500g that’s about 2-teaspoons of apple cider vinegar per pill.

In addition, some brands will include ingredients such as probiotics or cayenne pepper that are known to improve fat-burning. 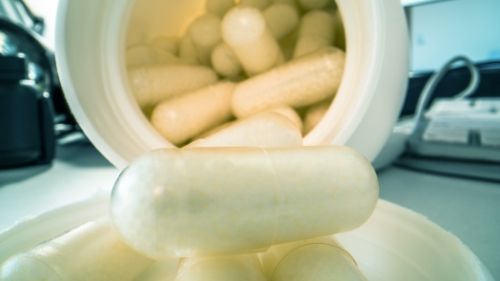 Are ACV pills safe for you?

So you want to use apple cider vinegar pills for weight loss but one question still lingers, are these pills safe?

Just like other dietary supplements, the FDA doesn’t regulate supplements and this can make it hard to know exactly what goes into your pill. In fact, one accidental injury by an apple cider vinegar pill led to an investigation of 12-different brands.

The results revealed that brands didn’t accurately list all ingredients in their pills. This inconsistent labeling is what makes it hard to really know the quality of these pills.

However, if you do choose to use apple cider vinegar pills, there is one major precaution you can take to choose quality brands;

These brands will often include logos from ConsumerLab, NSF International, Banned Substances Control Group, or United States Pharmacopeia. This is the best way to ensure you’re getting quality ACV pills

Apple cider vinegar myths should you be aware of?

This is completely false.

Even though apple cider vinegar can boost weight loss in various ways, it doesn’t mean the more you drink it the more benefits you will get. Too much of a good thing is bad and that stands true here.

In addition, you also risk causing some serious damage to your health. Stick to the recommended dosage and safety precautions when it comes to taking ACV.

Just like other weight loss supplements, apple cider vinegar is not a magical pill that will help you lose weight on its own.

This why successful programs such as the 21-day fat loss challenge use it as part of a  healthy diet and exercise routine. It can only boost your weight loss if you’re eating the right weight loss foods and doing the right exercises to burn fat. 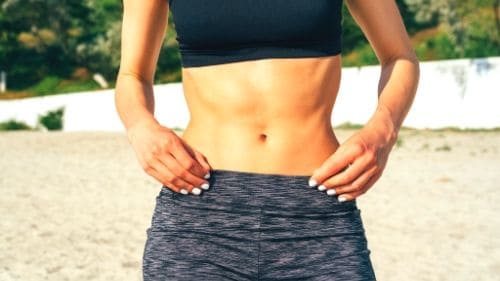 This is what makes apple cider vinegar good for weight loss when used alongside a healthy diet plan and exercise routine.

However, as apple cider vinegar is very acidic it is important to stick to the recommended daily dosage of 1- 2 tablespoons per day when you add it to your diet. You also have to dilute it before use by adding it to your cooking or using plain water.

Use safety recommendations such as spreading this dosage and not consuming it all in one sitting.

How To Effectively Use Apple Cider Vinegar For Easy Weight Loss 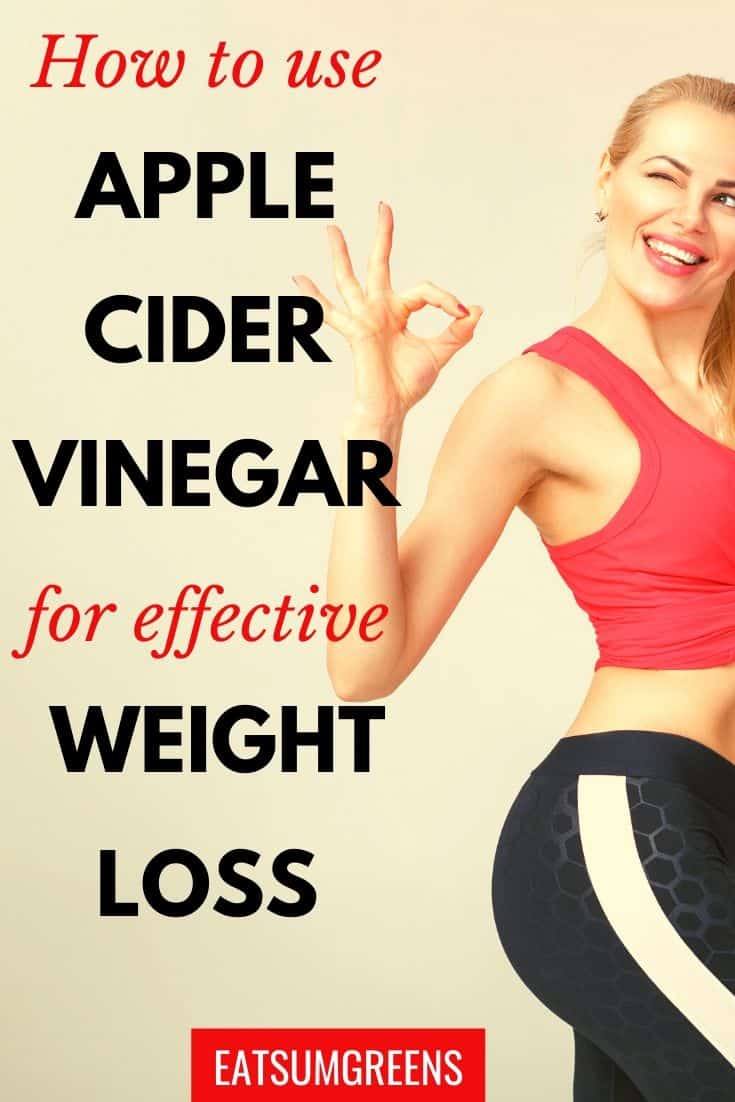